Digital advertising impact is created by an interaction between multiple channels. This means it can sometimes be difficult to track your online sales funnel and interpret analytics. Attribution modeling is about understanding which ads, referrals and searches played a role in getting a customer to convert. Here are answers to some of the most commonly asked questions about Facebook attribution.

One thing we hear on a weekly basis from our customers is that attribution is causing them grey hair and often makes Facebook look really bad compared to other channels, while Facebook’s own metrics show a very nice ROI. The main culprit tends to be Google Analytics, which most advertisers use to get an equal view of different online channels, as it shows multiple channels measured with the same method. While Google Analytics is an efficient and, even better, free and easy tool for keeping track of all of your online activities, it is very important to understand what it actually tracks and what it doesn’t.

There are three main reasons Google Analytics shows much lower conversion numbers compared to Facebook. We’ll deep dive into those in more detail below.

Which interaction gets the credit?

Facebook attributes a conversion to the last click the user has made on a Facebook ad (click-through or post click conversion), or, if no clicks happened, the last ad they’ve seen before converting (view-through or post view conversion). Google Analytics, on the other hand, gives credit to the last paid click by default, regardless of the channel, if any have happened.

For example, a user clicks on a Facebook ad for an interesting product but decides not to buy it. The next day he changes his mind, googles the product and clicks on a search ad; ending up on the same website to make the purchase. Facebook takes full credit for the sale, so does Google Adwords. For Google Analytics only the last click matters, so Facebook gets nothing. 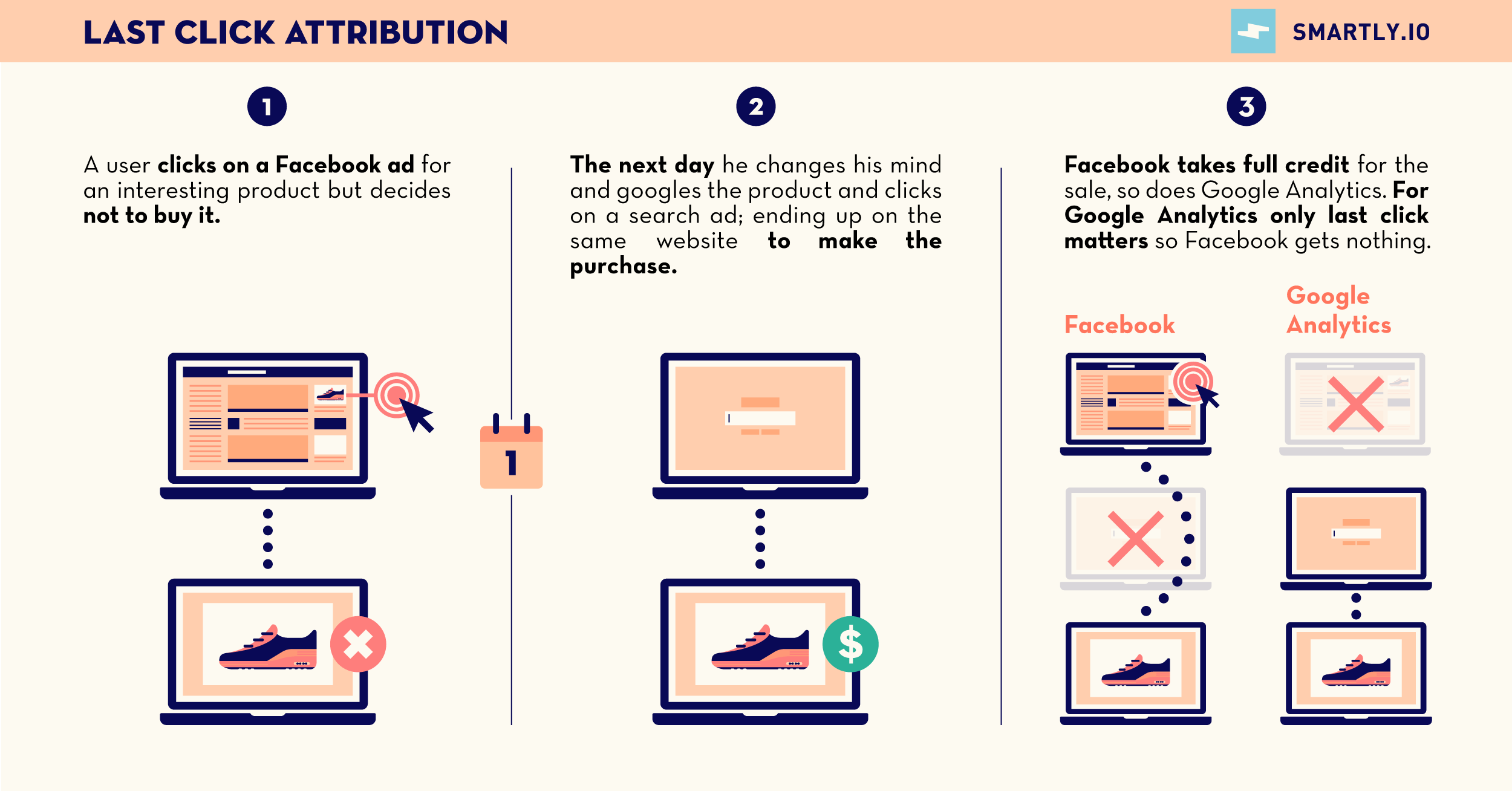 One of Facebook’s biggest advantages over its competition is the ability to link actions to users instead of cookies. In practice this means you can track and target the same user across all their browsers and devices as long as they are signed in to Facebook. Google Analytics, on the other hand, relies solely on cookies which means all tracking happens inside the same browser where the cookie was dropped. 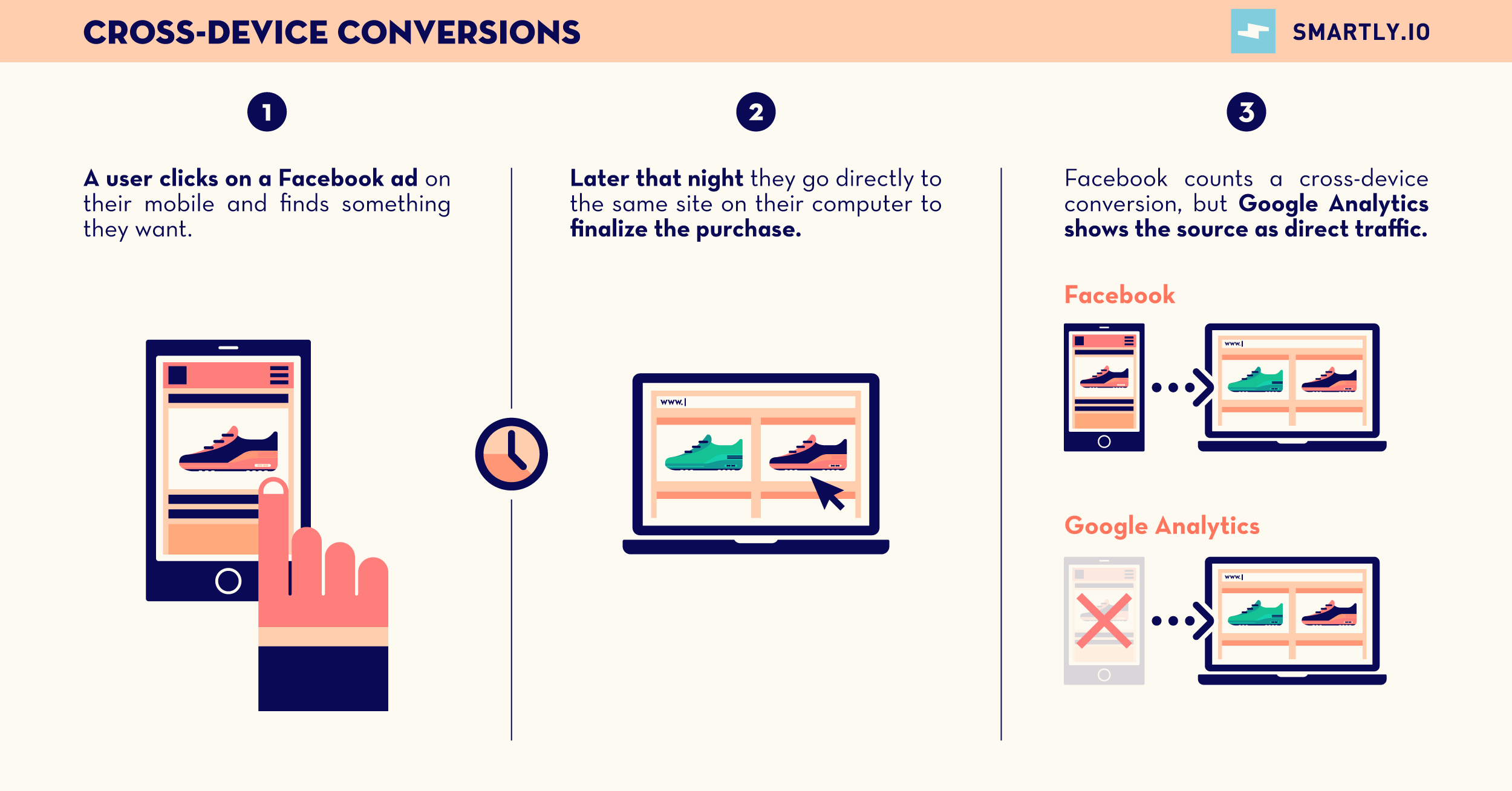 Example: A user clicks on a Facebook ad on their mobile and finds something they want. Later that night they go directly to the same site on their computer to finalize the purchase. Facebook counts a cross-device conversion, but Google Analytics shows the source as direct traffic. To get these numbers closer, you can look at Facebook’s cross-device reporting and only count the conversions happening on the same device.

No Replies to "Facebook vs. Google Analytics - Deep Dive to Conversion Tracking and Attribution Models"

Got something to say? Cancel reply

In the retail marketing toolkit, loyalty programs have proven themselves... END_OF_DOCUMENT_TOKEN_TO_BE_REPLACED

In the early days of SEO, web directories were the thing. Back... END_OF_DOCUMENT_TOKEN_TO_BE_REPLACED

In the retail marketing toolkit, loyalty programs have proven themselves... END_OF_DOCUMENT_TOKEN_TO_BE_REPLACED

In the early days of SEO, web directories were the thing. Back... END_OF_DOCUMENT_TOKEN_TO_BE_REPLACED